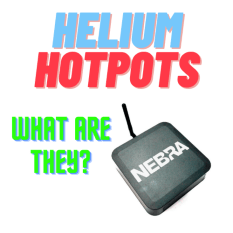 Cars.com vs. CarGurus.com saga shows the importance of SEO (and the bad side of a Google update) – Search Engine Land 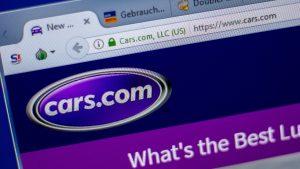 For Cars.com, the popular automotive marketplace, the March 2019 core update was good: the company has seen a 49% increase in search visibility since. SEO Director David Greene said he believes a lot of the success has to do with their SEO strategy around content and site performance updates, but there was another factor at play. While Cars.com saw a post-update bump, one of its biggest rivals, CarGurus.com, saw the opposite happen.

CarsGurus.com lost hundreds of thousands of number one placements in Google after the March update. About 30% of their keywords dropped significantly in Google. And you can see from the SEMRush chart below that their visibility in Google is back to where it was in December 2017:

CarGurus.com politely declined to be quoted for this story, but Greene said he believes that the downfall of CarGurus.com’s rankings also helped Cars.com realize a lot more traffic.

SEO in the spotlight

The financial results for Cars.com were not so rosy in the first quarter. The company’s revenue fell by nearly $6 million and it swung to a net loss of $9 million for the period. But one line in the earnings release stood out to us: “SEO traffic grew 49% year-over-year, driving record traffic and leads; material shift in SEO competitive share continues to accelerate.” According to Greene, Cars.com’s top traffic driver is search, so with the increase in visibility, that resulted in a direct increase in advertiser impressions and qualified leads for their dealership partners. There was an overall growth in conversions and leads from this boost in search traffic.

“In the first quarter, our total leads grew 15%,” Cars.com CEO Alex Vetter said in the earnings report. “Keep in mind, the most material shift in SEO market share took place just at the end of the first quarter and continues to accelerate into Q2,” he added.

The company also presented a slide in their earnings report showing the post-update swap that happened between the two rivals, while other competitors mostly stayed flat. 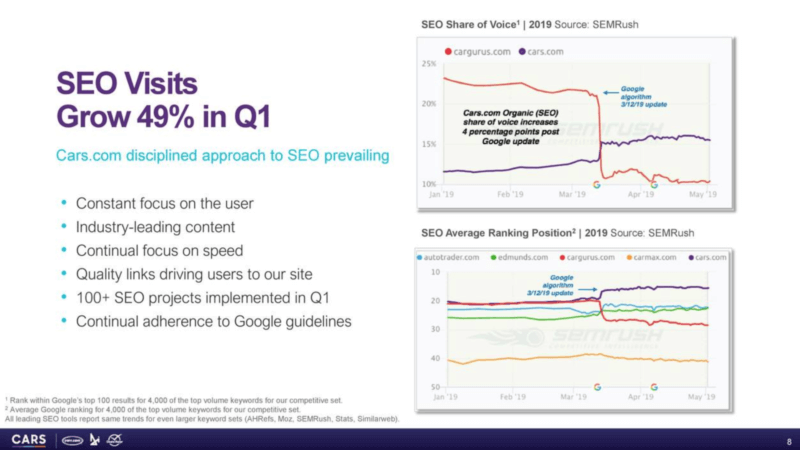 What happened to CarGurus.com?

We asked CarGurus.com for a comment, but they politely declined. However, one thing we saw was a steep increase in link building activities in December 2017. Shortly after, CarGurus.com’s Google rankings began to sharply increase. It wasn’t until the March 2019 core update where their rankings dropped off. It is almost like Google decided to completely ignore the links they built up starting in December 2017.

What we don’t know is what type of penalty this was. While the timing lines up with the March 2019, it could also have been caused by a manual action issued through Google Search Console. It resembles a drop caused by the Penguin update, which penalizes sites for spammy link practices. But we also know that Penguin is real-time and is run continually, without an update needed. Although the timing was in line with the March 2019 core update, I didn’t see many sites get hit specifically for link purposes around that time.

In its own earnings call, CarGurus.com CEO Langley Steinert didn’t say much about their rankings drop but did mention that Google isn’t everything to the company’s success.

“I would say that I think one of the themes we saw in the public discussion was that there was — I would argue kind of an inordinate amount of focus on organic traffic growth specifically Google. And I guess our only response to that is that over the last 12 years that I’ve been involved with this company, we’ve been through ups and downs and different Google algorithm changes and in the long haul we have benefited really by building a good product. We don’t — as a company we don’t spend a ton of time, focused on how we optimize our site for a given search engine. And I would even argue that like five years ago it probably would have — any given change in a Google organic — algorithm change might have had a bigger effect on our company, but at this point given especially all the investment we’ve made in brand, organic traffic specific for any given search engine just isn’t an enormous part of our business. So it isn’t — we’ve kind of grown up as a company to have a really varied number of sources of traffic. So it’s really not — we’re not dependent on any one source of traffic.”

You can also see from the SEMRush chart above that the company did increase their paid search spend as they dropped in Google organic search.

The lesson here is …

It appears that, yes, CarGurus.com took a major hit with their Google rankings. It also appears that Cars.com did see success with the March 2019 core update and when you add them both together, Cars.com won big here.

But Greene said Cars.com’s strategy will remain the same. He is currently running around 100+ SEO projects, which are around building out great content and improving site performance.

Your Google traffic can come and go. When you see successes, it can be a big win for the company. When you see downfalls, it can hurt the company in a serious way. Always make sure to perform SEO by the book, within the Google guidelines and don’t try to manipulate the algorithm.

And like many algorithms, there can be false positives, so even if you do everything right, make sure you have a backup plan and diversify your traffic.